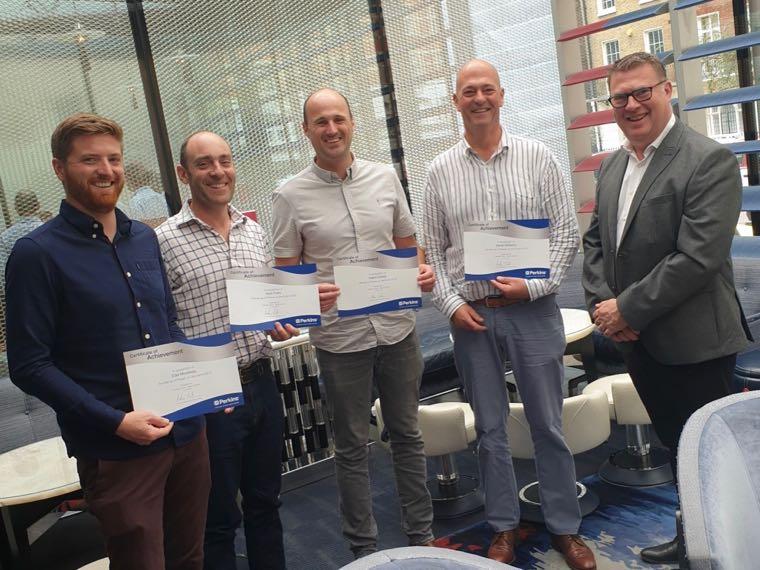 An eight-course tasting menu from Masterchef’s Marcus Wareing was the centrepiece of the 2019 Perkins Power on the Farm Awards, at a London event on 18 July.

Winners, runners-up and judges enjoyed an extravagant and elegant celebration at the celebrity chef’s eponymous restaurant at The Berkeley, enjoying the privacy and kitchen spectacle afforded by the Chef’s Table.

“Sending everyone away with a sense of achievement is the hallmark of Masterchef,” Marcus told the Perkins group, while posing for guests’ photographs and social media updates, “so I’m delighted to host both the winners and runners-up at today’s event. Enjoy the menu!”

With that impossible-to-ignore instruction, a veritable feast of flavour, culinary construction and epicurean enchantment followed, prepared and served up in front of participants’ eyes and accompanied course-by-course by perfectly matched wines from the Berkeley’s cellars.

Music to the ears of a roomful of agricultural journalists, one would say, but – of course – those same ears are always keened for the next story. Hardly surprising then, that when the provenance behind one course was revealed, story-detectors started spinning wildly, prompting a barrage of questions.

The story? Marcus buys his beef from a Cumbrian co-operative, Lake District Farmers. Here, the Spanish practice of prized, old-dairy-cow beef has been adopted.

Rather than sending dairy retirees into the burger-and-pie chain, they’re finished for six months on a combination of grass and grain, maturing and marbling the meat, and imbuing it with a rich, well-rounded flavour.

Apparently, it’s in great demand from top chefs: a host of other London restaurants features it. Marcus simply cooks it for two hours in a water-bath to bring out the flavour and maximise its tenderness: the result is more akin to fillet, belying its humbler origin.

Arguably one of the Guild’s most keenly-contested awards, as well as one of the longest-running, the Perkins Power on the Farm Awards comes with a £3,750 prize fund.

With the definition of ‘power’ only loosely defined, the contest attracts a wide range of entries from across the Guild’s disciplines – submissions from arable and livestock practitioners jostle with those from the machinery specialists.

Andy Curtis, global sales director for Perkins, summed up the spirit and longevity of the Awards before revealing the 2019 winner as Farmers Weekly’s Adam Clarke.

Adam’s article told the story of an enterprising Australian farmer and his weed-seed crusher. Not only did it engage with its pace and style, but the judges also recognised its interest and relevance to British farmers fighting black-grass battles.

Runners-up were David Williams (Farmers Guide) with an article showing how the benefits of precision farming could be accessible without huge investment; freelancer Nick Fone, whose biomass-burner article the judges felt could inspire farmers to look again at options for renewable, on-farm power generation; and Edd Mowbray (Farmers Weekly) for his insight into driverless tractors and their labour-saving, efficiency-boosting potential.