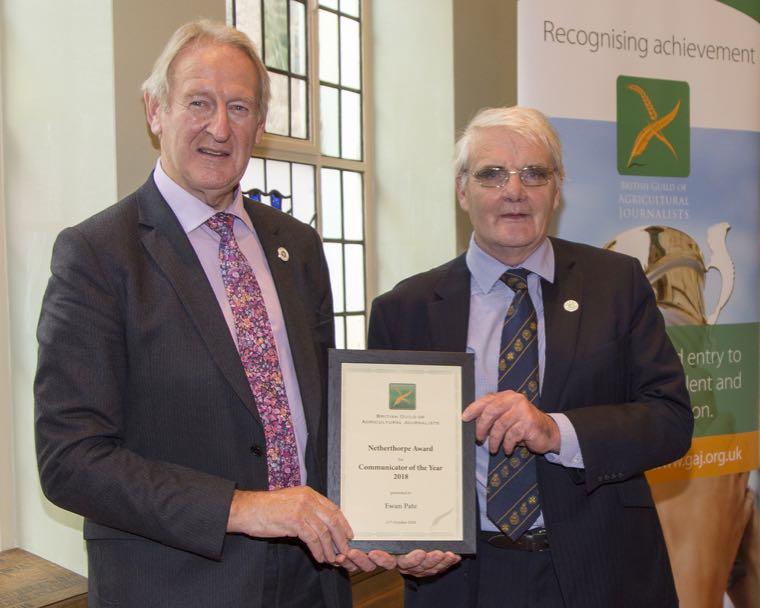 This award is made annually to the Guild member who has made an outstanding and sustained contribution to agricultural communications.

It is judged from nominations made by members of the Guild, to someone who has contributed to the dissemination of knowledge and understanding about agriculture in its widest sense, over a number of years.

This was a very difficult decision, with nominations on behalf of some very deserving individuals.

But in the end, the Guild's judging panel decided that the 2018 Netherthorpe Award goes to Ewan Pate, freelance journalist, Scottish editor for Farmers Guardian and arable writer for Farm North East.

Judges praised Ewan’s exceptional, insightful journalism, his eye for a great story and engaging writing style, as well as his enthusiasm and quiet determination.

He is held in huge affection and respect by Scotland’s farming community and further afield.

A farmer himself, Ewan began writing in the mid 1990s with regular opinion pieces for The Courier, Tayside Farmer and Press & Journal.

His full time journalistic career began in March 2005 when he was appointed farming editor at The Courier. As such he was responsible for filling the farming section of one of Scotland's leading regional daily newspapers six days a week.

This covered all aspects of farming news – from political and technical developments to reporting on local shows and sales including the Royal Highland Show, the Kelso Ram sales and the Stirling Bull Sales.

Ewan retired from The Courier in January 2016 but was persuaded to come out of retirement to become part-time Scottish correspondent for Farmers Guardian, contributing news and business stories and occasional features.

As one judge said: “His impact doesn’t end in Scotland - he is a regular traveller and reporter south of the border and very engaged in bold political reporting, with an amazing ability to bring it completely into context and understandable to farmers.

“Even the intricacies of Scottish tenancy legislation are meat and drink to Ewan.”

Behind the scenes, Ewan is hugely, and quietly supportive of new entrants into the profession, and he is also very involved in charitable and voluntary works with the Royal Scottish Agricultural Benevolent Institution; Scottish Enterprise Rural Leadership and the Guild.

He is also a “thoroughly wonderful, wise and kind man with a wit that is always perfectly pitched”.