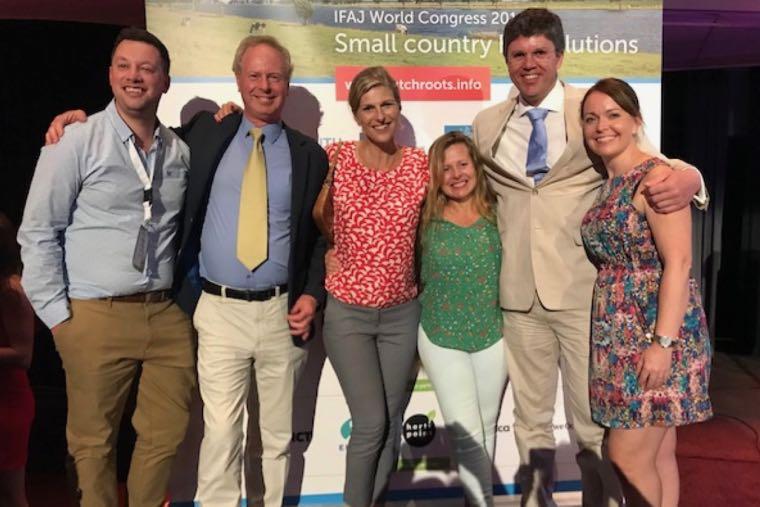 British Guild members joined more than 200 journalists and communicators from across the world in the Netherlands for the International Federations of Agricultural Journalists annual congress.

The event - titled ‘Dutch Roots’ - aimed to give delegates a glimpse of what it’s like to farm in the Netherlands, as well as lifting the lid on some of the scientific and agricultural developments the country’s leading.

British Guild members Caroline Stocks, Simon Haley, Chris McCullough, Tim Price and Howard Venters started the week at Wageningen University, where they heard about some of the agri-science developments being made there.

They were joined by BGAJ president Catherine Linch, UK IFAJ representative Jane Craigie, and Adrian Bell, who is also the IFAJ’s Treasurer.

Delegates also got the chance to hear from a number of leaders in Dutch agriculture about the challenges and opportunities facing the sector.

During the week, the group went on a number of tours which took them across the country, covering the huge variety of farms, businesses and research which is currently happening in the Netherlands.

These included visiting the world’s largest cut flower distribution centre, meeting some of the Netherland’s 12 million pigs, and learning about the Netherland’s focus on ‘circular farming’, which seeks to create sustainable food systems by recycling waste more efficiently.

Some of the delegates were even treated to a meal by Michelin-starred chef Soenil Bahadoer, who cooked a six-course meal using local food and styled on the works by Dutch painter Vincent Van Gogh.

Freelance journalist Caroline Stocks said she left this year’s event with countless story ideas following trips to the world’s first floating dairy and one of the Netherland’s first soya growers.

“Coming to congress is always a great opportunity to hear from farmers and speakers who I wouldn’t ordinarily get access too, and as usual I’ve come home with lots of articles to pitch,” she said.

“What’s also been great is catching up with and meeting other journalists around the world - usually over a lot of really good food.

“It’s often easy to see farming from a UK or European perspective, but going to congress forces you to think differently about what you’re seeing, and I’d like to think I’m a better reporter because of it.”

“The IFAJ is such an important part of what the Guild has to offer its members, and as we face Brexit, I think our international outreach will become even more valuable,” she added.

“Through my involvement with the IFAJ, I can now call a journalist anywhere in the world for their views, information and contacts. This international community is open, giving and an incredible knowledge-bank.

“The annual congress is just part of what the IFAJ does, it also upholds freedom of the press globally, enhances the professionalisation of agricultural journalism by supporting the formation of new guilds and it offers both practical and leadership training.”

This year British Guild members won seven of the IFAJ awards – which is better than any country has achieved in any of the recent years that Jane has been involved with the organisation.

“It was such a proud moment hearing so many of our members being recognised for the quality of their work on the world stage,” she added.

“For so many reasons, not least friendships with people from all over the world, I’d urge everyone to give the next IFAJ congress a shot, you won’t regret it.”

You can find out more about this year’s event by visiting www.dutchroots.info.

The 2019 IFAJ congress will be held in Minnesota.