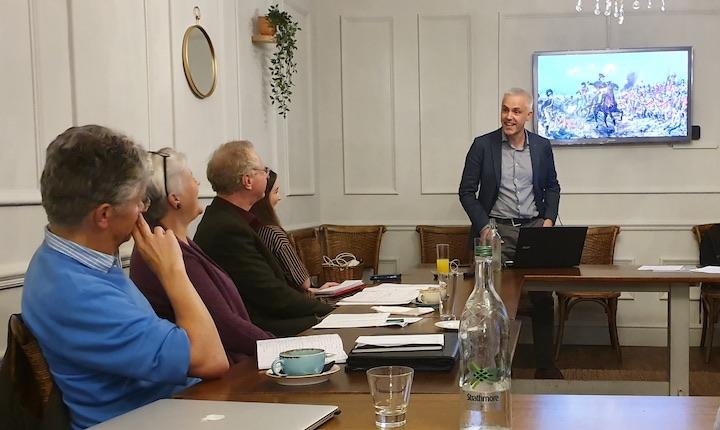 Members of the guild’s Midland’s branch met Veganuary founder Matthew Glover on Thursday, 24 October, to discuss how a more positive relationship could be fostered between vegans and the farming community.

About 15 agricultural journalists and communicators watched a presentation from Mr Glover who insisted vegans and farmers have more in common than they realise. A diverse and, at times, controversial debate followed.

The event was arranged to help initiate a conducive dialogue between vegans and the farming community; identifying areas of common ground and opportunities for collaboration within farming, marketing and PR professions.

Veganuary challenges consumers to embrace a vegan diet for January with the aim of converting them to a plant-based diet permanently.

The charity started in 2014 with 3,300 participants and has roughly doubled every year since. Large brands and retailers have piggy-backed on the movement and it now has approximately 250,000 participants. The target for 2020 is to see 350,000 take up the challenge.

According to a survey carried out a week after the month-long event, about 50% of participants say they continued to follow the plant-based diet. Mr Glover said that number drops off further when a second survey is carried out six months later.

A grandson to a butcher’s family, Mr Glover has been vegan for 22 years. He told the meeting that binary arguments and media mud-slinging did little to help either side and suggested vegans and farmers may have more in common than they realise.

He said: “We’re all concerned about climate change and protecting the natural world. We all disagree with unnecessary suffering to animals, and want people to live longer healthier lives. But there does seem to be an us and them developing at times between vegans and the farming community, and also between vegans and the general public at large.”

Assembled journalists challenged Mr Glover on the language and accusations often made by vegans, and the calls for abandoning meat based upon global statistics and science which often didn’t stand up to scrutiny. The meeting offered many examples of hypocrisy and explained global comparisons do not offer a fair representation of how the majority of UK livestock is produced.

Common ground on this standpoint was hard to establish, however a temporary compromised was admitted by Mr Glover.

He said: “Most people accept meat consumption is too high and we should all get behind [reducing it]. Maybe we should be think more about whether can we promote lower impact beef, that to us would be a good temporary solution - it isn’t the end game but we would get behind it.”

Mr Glover explained that Veganuary has been funded by sponsors but that the structure had led to some difficulties over some of the product promotions and campaign messages. He is now moving away from the sponsorship model towards and targeting individuals and fundraising rather than brands and businesses.

Despite healthy debate the room remained sceptical over whether vegans and farmers could ever become allies. Whether a conducive narrative between agriculture and the Veganuary movement will now be established remains to be seen.

But the meeting certainly opened the door to further engagement down the line to encourage more respect, understanding, and cooperation where there is common ground.