The Guild's Stuart Seaton Award for regional papers and their agricultural / rural journalists was presented at the AgriLIVE Smithfield event.

The award was open to non-members of the Guild for the frst time to give regional correspondents the opportunity to taste one of the benefits of Guild membership first hand.

The judges were unanimous in their selection of the Aberdeen-based Press & Journal newspaper and Guild member Joe Watson, its agricultural editor, as the 2009 winners.

The submissions for the award highlighted the Press & Journal's commitment to coverage of farming and rural affairs in a publication that is read throughout northern Scotland. The judges described the farming pages as being of a very high, consistent quality and a cut above the other entries. 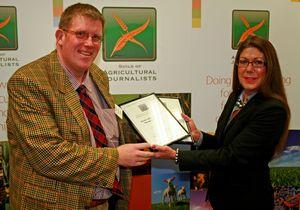 Of Joe's content, the judges said: "His entry demonstrated originality and depth of thought, which added real value for the paper’s readers as well as helping to interest and inform those outside the agricultural industry.

"Joe is an outstanding writer, presenting facts clearly and in an interesting way, while focusing on what is relevant to his paper’s readership. In doing so, he enables his paper to rightly justify its reputation as an authoritative farming voice in its region."

The runner-up for the regional publication award was the Western Morning News and its farming editor Peter Hall, whom the judges said provided an authoritative package in empathy with his paper’s West Country readers’ interests.

There was a good entry for the 2009 award, which was ably judged by Guild president Margaret, Countess of Mar; former Farmers Weekly editor Stephen Howe; and Stuart Seaton’s daughter, Val Chapman, previously of Farmers Guardian and now publisher of Out & About magazines.