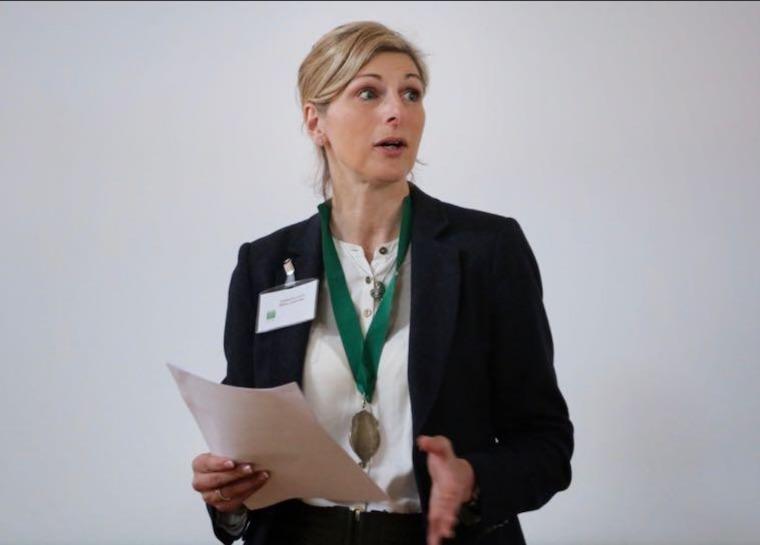 The Annual General Meeting of the Guild will be held on Friday via the video conferencing system Zoom, enabling as many members as possible to participate.

This technology, which has been made available to the Guild by the International Federation of Agricultural Journalists (IFAJ.org), enables access to the online meeting through a PC/Mac desktop or laptop computer, or a mobile device such as a tablet computer or smart phone, etc.

Past experience shows that using earphones is recommended to avoid the microphone picking up the audio and re-transmitting it.

Apart from an internet connection, the Zoom software is needed, so be sure to do this in good time before the meeting. For members unfamiliar with video conferencing, there are some useful short tutorials on the Zoom.com website.

To prepare for the meeting:

For a mobile device, visit the relevant app store for Apple and Android devices, then search for and download the Zoom app.

To join the meeting on Friday:

1: To register that you are taking part in the meeting, from 11.30am onwards send an email with just your name in the subject box to deputy@gaj.org.uk as this will ensure we have a register of participants for the Minutes and a check that we have a quorum.

3: Check on the screen to see whether your microphone and/or camera are muted and click to unmute if necessary.

Unable to join the meeting?

If you are unable to participate but want your vote to count in the elections and the motion on the agenda below, Guild director Paul Lay has agreed to act as your proxy and cast your votes accordingly.

Please email your voting preferences no more than 24 hours before the meeting (ie from 12 noon on Thursday) to paul.lay@ntlworld.com; alternatively, you are free to nominate another member to vote on your behalf but the name of your proxy must be emailed to Paul before the meeting.

You can download the Minutes of 2019 BGAJ AGM here. The Guild will report on the financial statements for 2019, which the Treasurer will report on during the meeting.

For an overview of Guild activities, award results, international activities, CPD training initiatives and the work of the Charitable Trust, please read the BGAJ Yearbook 2020.

Please note: Only full Members of the Guild may propose, second or vote on any matters put to the meeting. Under Guild rules, associate members (Friends, Student Friends, Retired Members and Honorary Members) may participate in the meeting but do not have a vote.

1. Welcome; call to elect a chairman for the meeting

2. Apologies for absence and approval of AGM minutes 2019

3. Review of the work of the previous year – BGAJ Chairman, Catherine Linch

President – Baroness Boycott (for a second year) nominated by the directors

Chairman – Olivia Cooper, nominated by the directors. Olivia has served as Deputy Chairman for the past two years, with particular responsibility for Guild events

Directors – maximum of 11 to serve on the management Council.

Caroline Stocks has decided to resign as a director and manager of the Guild’s CPD training programme due to other commitments.

Jamie Day has served an initial three years and was re-elected for a further two years, the maximum permitted under Guild rules. He must now stand down for at least one year before seeking re-election if he wishes.

Johann Tasker has also served the maximum five years, during which time he has been Communications secretary, managing the Guild’s website and eAlerts, and publishing the Guild Yearbook. As Johann wishes to stand for election as Deputy Chairman at the first Council meeting following the AGM, the directors intend to use their powers under the Articles of Association to re-appoint him as a director at that meeting.

As things stand now, the following nominations to fill four director vacancies have been received:

Liz Snaith – a current director who has completed a three-year term and is seeking re-election for a further two years. Liz has served as membership secretary and, if re-elected, has volunteered to manage the Guild’s CPD training programme. Nominated by Rachel Queenborough and Paul Lay.

Gaina Morgan – freelance journalist and editor of the Royal Welsh Agricultural Society Journal, based near Bridgend; nominated by Dei Tomos and Ben Briggs

6. Motion – Discussion concluding with a vote will consider a motion to clarify the rules relating to BGAJ Awards: a modification of Byelaw 8B proposed by Adrian Bell.

Existing: Guild Awards are open only to full Members of the Guild who are up to date with their subscriptions.

Proposed: Guild Awards are open only to full Members of the Guild who are up to date with their subscriptions. No entry fee shall be payable for any Award.

Reason: As a former Award Secretary, past Chairman of the Guild and regular contest judge, I know the value to members of the Guild’s numerous awards. They are a recognised benefit of Guild membership: a celebration of the skills and expertise contained within our membership ranks, relating directly to our primary objective of raising and maintaining standards within our profession. But members’ eligibility to enter any of the Guild’s awards should be determined by the annual subscription alone; there should be no additional entry fee. So while delighted to see the introduction of the PR Award in 2019 – a category that has been in discussion for more than ten years, following repeated requests and suggestions from members – I was dismayed to discover that an entry fee of £100 (for ‘administrative costs’) had been levied. The Guild should not ask its members to pay additional fees for their work to be judged and recognised by their peers; awards should be open to all, not merely the preserve of those who can afford to enter.

Explanation from Council: The context for the fee relating to the PR Award in 2019 is as follows:

- There was high demand from membership for a PR Award to be added to the Guild awards offer as expressed in the 2018 member survey.

- In November 2018, Council invited 13 PR member representatives to attend a discussion forum on the proposed new award, held at the CropTec event in November 2018.

- This forum discussed many aspects of the new award, including whether a fee would be appropriate. It was deemed that sponsorship would be difficult to obtain to cover costs.

- The forum considered fees typically charged for award entries by other organisations, ranging from PR industry bodies (that also command membership fees) through to more regionally orientated awards, and a sum of £100 per entry, at the lower end of the spectrum, was agreed by the forum as reasonable for businesses entering PR campaigns that are led by BGAJ members.

- Council duly agreed that there would be a fee for PR Award entries.

- There has never been any discussion that the fee for a PR award would set any kind of precedent for fees being associated with BGAJ journalist awards.

7. Questions / Any other Business – including virtual hand-over to the new BGAJ Chairman.