The 2013 winner of the Guild's Netherthorpe Award, Ken Fletcher, deputy and technical editor of The Scottish Farmer, is described by Guild chairman Jane Craigie as a warm and charismatic agricultural journalist and an ambassador for farming. 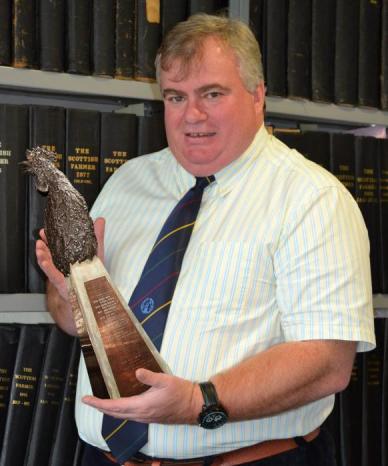 He is also a keen mentor of youngsters and actively supportive of the Scottish Association of Young Farmers Clubs, as well as several charities.

Guild members who nominated Ken said his energy and enthusiasm, coupled with a passion for the job, have made him many friends from all walks of life in the industry.

“I am deeply humbled and honoured to receive the Netherthorpe Award,” said Ken.

“I always thought it was for people older and wiser than me … but then I found out that there are very few that are now older, though many remain wiser!

“Agriculture is an industry which rarely says ‘thank you’ to anyone and so on behalf of myself and my colleagues – who are very much part of the reasons why I could even be considered for this award – I say a huge ‘thanks’ to those who nominated me and for those who adjudged that I deserved it.”

Ken was a member of the West Renfrew Young Farmers Club when he joined The Scottish Farmer as a cub reporter aged 17 in 1977.

He says his greatest achievement was the coverage of foot-and-mouth disease in 2001, when he and other members of The Scottish Farmer team did not just report the tragedy but became a counselling service to farmers all over Scotland.

As deputy and technical editor, he reports on livestock, arable and machinery matters, and is inclined to mentor new members of staff to help them get to grips with the routine of a weekly publications.

With his brother Alasdair, editor of The Scottish Farmer, he owns a 110 acre farm in Bishopton where they have reared Suffolk and Rouge de l'Ouest and now have Blackface sheep and Aberdeen-Angus cattle.

In other words, Ken is very much involved in the industry as well as reporting on it; he is also a renowned after dinner speaker and one of the few who can combine humour with a serious message. Burns Suppers are a particular forte.

But other than organising a fishing trip with farming friends to Knoydart, there is nothing he enjoys more than going to an agricultural show - be it the Royal Highland or a local event - to talk to farmers, partake of a little refreshment, and report in The SF on Scotland's finest livestock.