The Guild’s 2009 Netherthorpe Award, for consistent excellence in agricultural communications, was presented at the Royal Show awards party to Guild member Ken Rundle, who earlier is the year gained similar recognition by way of the inaugural Ambassador Award from NFU Scotland. 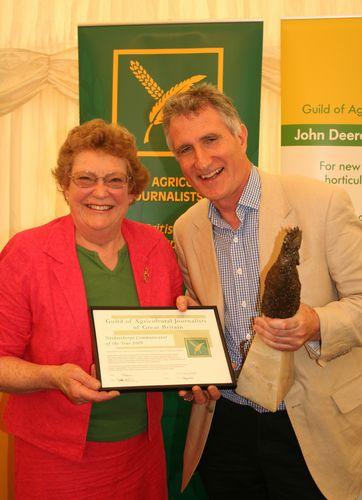 "In more than a quarter of a century devoted to agricultural communication, Ken has proved to be an excellent journalist and commentator who has inspired many young people to take up careers in the farming sector,” said Guild awards secretary, Lindy Margach. “He has also shown an unparalleled ability to use an extensive knowledge of the industry as the source of sharp analysis and clear explanations of sometimes confusing issues."

Kent spent 20 years with BBC Scotland, where he started as producer of the daily Scottish Farming news radio programme before becoming rural affairs correspondent and presenter of Landward, the weekly television programme. In 2008, he moved to SAC, the Scottish Agricultural College education, research and advisory organisation, to take on the head of communications role.

While very different from his previous jobs, he says, there are many similarities in terms of the need to get across simple messages and information about often complex topics.

"Ken produced and presented a daily radio programme before moving on to interpret food, farming and rural issues to a general audience via news programmes on both radio and television,” recalled Lindy. “Being appointed to this role at the onset of Britain’s BSE crisis meant he was on the air on a daily basis, reporting and analysing the development of one of the biggest stories of its kind for many years.

"His ability to explain clearly the veterinary, economic and social impact of BSE and, later, other crises hitting the farming industry, meant that he was also a constant source of reference for other journalists and for programme makers throughout the BBC," she added.

Moving on to a weekly television programme gave Ken the opportunity to help build a bridge of understanding between rural and urban populations – a key role of the agricultural communicator.

"Most recently, he has moved from the ‘front line’ of daily reporting to the equally important role of identifying and communicating essential messages from the fields of research and education," noted Lindy. "But the quality of output has remained, to the benefit of his many colleagues throughout agricultural journalism."

After receiving the Netherthorpe ‘crowing cockerel’ trophy and framed certificate from the Guild president, Ken Rundle said he considered it a great honour to receive the award.

"I'm very proud to be an agricultural journalist, to be involved in this industry and to be a part of the communications sector of this industry," he said.