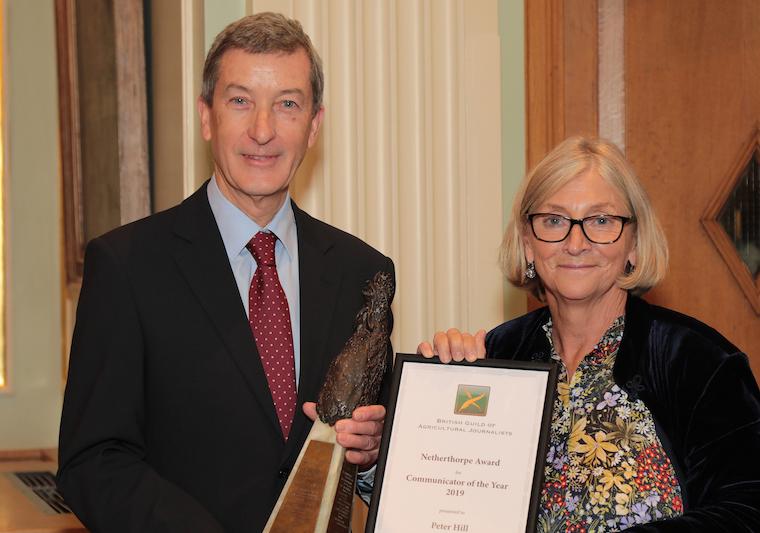 Respected journalist Peter Hill has won the Netherthorpe Communicator of the Year Award for 2019.

Known for his work in the agricultural machinery and technology sector, Peter has been a stalwart of agricultural communications, providing informative and well researched articles for more than 40 years.

His articles, which have graced the pages of Farmers Weekly, Crops, Future Farming, Big Farm Weekly, Farm Contractor and numerous other publications - both in the UK and overseas - have won him many awards over the years.These include the Perkins Power on the Farm Award, Institution of Agricultural Engineers Journalism Award and the Yara Award.

The Netherthorpe Award is made annually to the Guild member who has made an outstanding and sustained contribution to agricultural communications. This year saw a number of impressive nominations, which gave judges a very difficult task.

Peter was presented with the award at the Guild’s Harvest Lunch, held at Painters Hall on 17 October.

He says: “I'm delighted to receive this award and to have the opportunity to thank Tony Collier, Guild member and former publisher of Farm Contractor magazine, for giving me the chance as a raw 18-year old to start a career in agricultural journalism.

“My career has brought some amazing experiences, huge satisfaction from reporting on the landmark machinery and technology advances introduced since the 1970s, and the pleasure of meeting some fine and interesting farmers, contractors and machinery folk - as well as fellow journalists.

"I also thank Reed publishing for the very different experience of writing on technical matters for a weekly newspaper (Big Farm Weekly), for making me redundant when that title closed, which gave me the nudge to go freelance; and along with many other publishers and editors, for commissioning the work that has kept me sustained over the 25-plus years since.”

Along with his writing, judges also commended Peter for his valuable work as a Guild Council member, where he has committed large amounts of his spare time.

‘The Guild owes Peter a huge debt of gratitude’, one said.

Peter adds: “The Guild is a marvellous community of people who express their passion for agriculture and the countryside through their writing, broadcasting and photography; I'm very pleased and proud to be a part of it."