The Guild’s Netherthorpe Communicator of the Year award for 2010 was presented press and PR consultant Ross Muir, who said: “I am honoured and privileged to receive this award after more than forty years in the agri-communications business.” 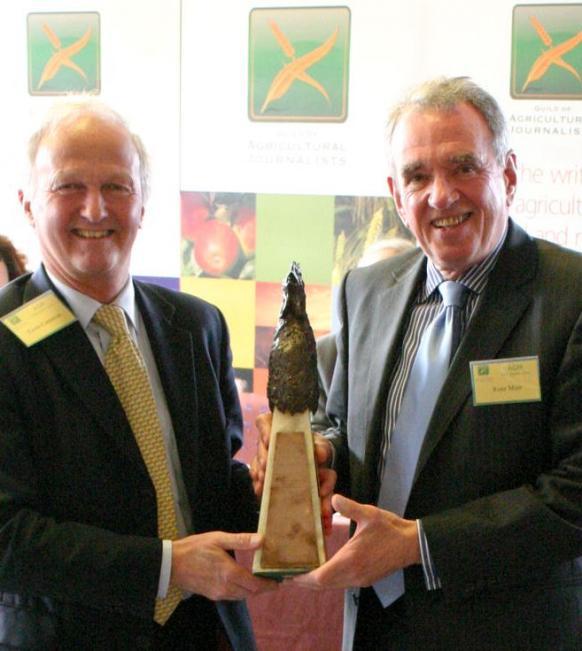 Guild president Lord Ewen Cameron (pictured left) presented Ross with the crowing cockerel trophy, which is permanently displayed in the bar at The Farmers Club.

Today, Ross focuses on press and public relations but his career includes many years writing as a journalist for several familiar titles.

“I studied agriculture in Aberdeen before joining the staff of The Scottish Farmer as a trainee reporter,” Ross recalls.

“I then moved to The Scotsman, later joined a features agency in Fleet Street, London, and had a spell on the farming desk at the Press & Journal in Aberdeen.”

He set up a public relations consultancy in the early 1970s and also started freelance broadcasting with the BBC, working on various radio and television programmes and presenting at both Grampian and Scottish Television.

He was best known, however, as the presenter for 25 years of the BBC’s award-winning Landwardprogramme, which took him filming all over the world.

A 1991 documentary he scripted and presented about rural life in Papua New Guinea won the One World Broadcasting Trust’s award for best regional television programme.

“For the past twenty years I’ve worked as press officer of the Royal Highland Show, which last year attracted an audience of nearly 190,000 people, handled media relations for the Royal Highland & Agricultural Society of Scotland, and edited the members’ magazine,” notes Ross.

Although the agency has a wide portfolio of non-agric clients, we continue to specialise in the food and farming sector.”

The citation for the Netherthorpe Award reads: “Ross Muir is one of Scotland’s most respected public relations experts specialising in the food and farming sectors and has been a central force in agri-journalism in newspapers, magazines, radio and television.

“It is a mark of his professionalism that he has frequently been the first point of contact for organisations or companies in the industry either seeking to build a public profile or restore public confidence after national disasters such as BSE and foot-and-mouth.”

Although Ross says he regards winning the Netherthorpe Award as the pinnacle of his career, it doesn't signal an intention to retire.

“As a Guild member, I will continue to spread the word about food and farming, a sector all too frequently taken for granted by the politicians and the public,” he says.