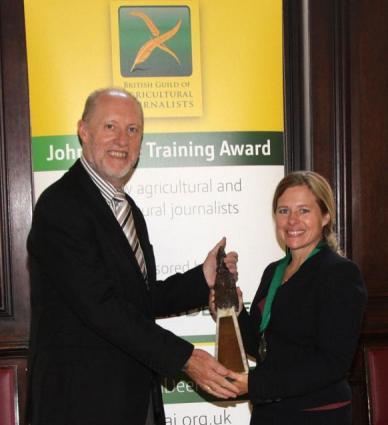 The 2014 recipient of the Netherthorpe Award trophy is Steve Mitchell, PR practitioner and former staff journalist, and of particular relevance to this accolade, the long-time organiser of the Guild's John Deere Training Award and its intensive and influential writing course for aspiring journalists and communicators in agriculture and horticulture.

Announcing the award at the annual Harvest Lunch, Guild chairman Jane Craigie said: "To say that the winner of this year's award has given a huge amount to many people in this room is an understatement. He has given them the all-important start to their careers in journalism or communications."

His nominator said of the winner: "As an editor, I know I can call on him when I am looking for the next star journalist. He takes a great interest in the progress of course ‘graduates’ and is always keen to help and champion those he believes will be an asset to a potential employer.

"This role, organiser of the Guild's new entrants training scheme, is one he carries out entirely voluntarily, but always professionally and willingly – and it is invaluable for all concerned."

Steve Mitchell and his partner Adrienne have put more than 250 potential agricultural journalists through the training course, a feat of dedication and one which is absolutely core to the continued success and high standards of Britain’s agricultural press. Look at any of the UK’s farming media or PR companies and most employ one or more people who have benefited from the scheme.

After leaving university, Steve spent almost 10 years from 1978 as an agricultural journalist with Morgan-Grampian Farm Journals, working on the monthly magazines Livestock Farming and What’s new in Farming, including a five-year spell as editor of the latter title.

He then moved into public relations as Press & PR manager at the Royal Agricultural Society of England (RASE), managing publicity for all the Society’s shows and exhibitions, including the Royal Show and specialist technical events, including Cereals and the Pig & Poultry Fair.

Steve joined specialist PR agency Pharo Communications in 1989, writing press releases and features, producing and editing a range of in-house magazines, newsletters and promotional material, and managing PR campaigns and special projects. He and his wife Adrienne left Pharo to set up their own business.

ASM Public Relations was formed in April 2004 and looks after PR and event support for John Deere and John Deere Financial. Steve has organised the John Deere Training Award on the Guild’s behalf since it started in 1991.

"Huge thanks are due to course lecturer David Mascord, who after all is the key man, to all those past course members who supported my nomination, to John Deere for continuing to support the Award and my role in it, and of course to my wife/business partner/better half Adrienne," said Steve.

"To have my name listed alongside the likes of David Richardson, Stuart Seaton, Arthur Anderson and all those other truly great agricultural journalists is honestly beyond my comprehension."