Swiss tour is a big hit with Olivia Cooper 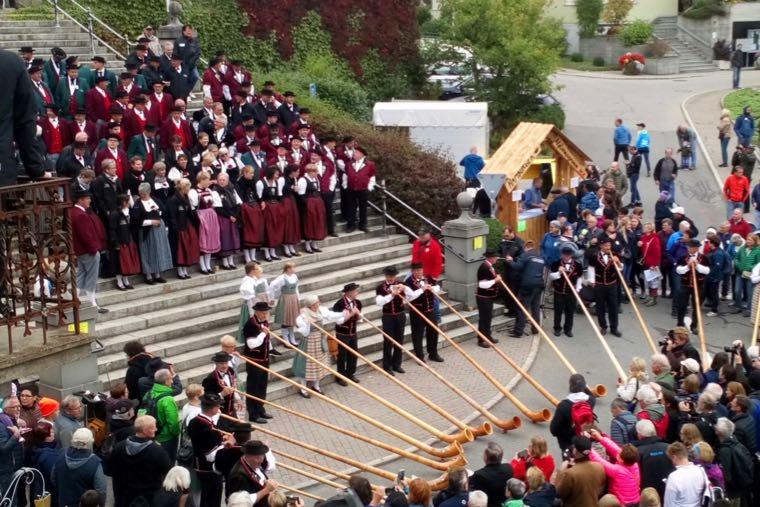 As Nike would say: If you haven’t been on an ENAJ tour yet, just do it. Admittedly I had the odd twinge of nerves as I sat on the plane trying to learn a smattering of German (why did I leave that so late?), but it was one of the most inspiring and enjoyable trips I’ve been privileged to take part in.

After a journey involving planes, trains and automobiles, I was very relieved to bump into Nigel Akehurst of Indie Farmer fame at the bus stop (hooray, another English speaker!). Together, we wound our way up the mountain to our destination – a remote yet beautiful hotel in the Alpine foothills.

Luggage dumped, we headed out to the first visit – a family farm milking 45 Brown Swiss cows and producing their own delicious cheese. Cue obligatory cheese and Swiss wine tasting – it’s a chore this agricultural journalism lark.

On the way home we stopped at a goat farm where 80 goats were the source of variable cheeses, dried meats, and even goat milk ice cream. The perfect opportunity for Heidi-esque photos as the herd tripped down the mountain to be milked. 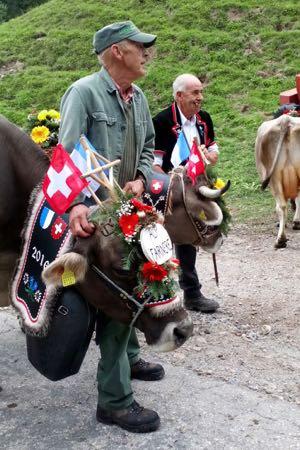 All the Swiss farming stereotypes are absolutely true. The cows genuinely wear bells round their necks while grazing, everyone genuinely lives on cheese (at least we did for the duration of the trip – cheese heaven!) and that Swiss chalet architecture – yes, it’s everywhere.

The next few days were a wonderful mix of farm visits, political discussions and tourist trips. We met Bernard Lehmann – the Swiss equivalent (in job terms at least) of Michael Gove, heard from single-issue consumer pressure groups, visited the Swiss cheese awards and scaled the heights of Mount Pilatus before an evening cruise on Lake Lucerne.

But the highlight of the trip for me was taking part in the Alpabfahrt – the Alp Descent.

This involved several farmers walking hundreds of cows down the mountain roads to their winter homes. They decorate the cows with flowers and head-dresses, dress up in traditional Swiss clothing, and finish at the local town square where over 10,000 visitors turn out to celebrate.

The cows are fitted out with large ceremonial bells, so the noise is deafening but exhilarating, and the tremendous welcome the farmers are given all the way down their route is heart-warming.

Later, we were treated to renditions from the local yodeling choir and alpenhorn players, with the festivities – complete with Swiss German sausage and beer – going on well into the evening.

Being involved in such an occasion was a huge privilege and one I shall never forget. But there was one other incredibly important aspect of the trip, and that was the people.

Around 45 journalists from all over the world took part. I learnt about farming and reporting in places like Ghana, Bangladesh, Ukraine and Argentina.

Many were very active in their home Guilds and I came home filled with ideas on what the BGAJ can do for its members – some of which, in due course, I might actually help bring about.

As a freelancer, I’d always avoided going on such trips as there’s no editor to foot the bill. I did get plenty of commissions out of it, but the value was so much more than monetary.

I would encourage everyone who is remotely interested in travel and farming to take the plunge – you won’t regret it.