An article exploring the controversial issue of badgers and their role in the spread of bovine tuberculosis among cattle was one of the winning entries in the Guild's 2011 Yara Journalism Awards, presented at the annual harvest lunch by Benoit Lamaison, managing director of Yara UK. Use the highlighted links to read the winning articles. 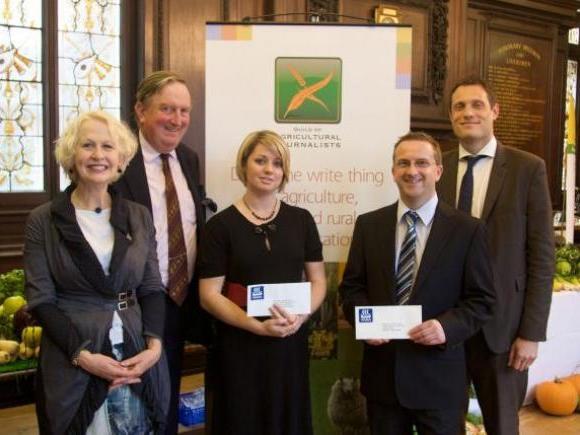 Peter Hall, farming editor on The Western Morning News, covered the debate on whether a cull of badgers is justified in relation to the control of bovine tuberculosis. He also explored the broader and arguably more contentious issue of what to do about a fast-expanding badger population that is protected by law but has no predator control.

The judges for the Environment & Rural Affairs category said: “Peter Hall’s article put political correctness to one side and was a brave, honest assessment of the current situation, which made us all sit up and reassess our view of Mr Brock.”

It was a close result, however, requiring the judges to read the articles and listen to the broadcast recordings several times. In the end, just one point separated the top three entries, so special mention should be given to the runners-up.

Bruce Jobson wrote a thought-provoking piece for The Newcastle Journal on how the needs of modern food production, tourism and caring for the environment can be a difficult balance, while freelance Andrew Watts entered a from Farm Business that explored the financial viability of solar power to the energy market, and whether it offered a favourable annuity for the money as a standalone investment.

The Arable category award was won by Mike Abram, deputy arable editor, for an article published in Crops on original studies undertaken by Farmers Weekly, Savills and Rothamsted Research that throws new light on an important topic for many arable farmers – how to control blackgrass to combat its significant effect on crop yields when many populations are highly resistant to current herbicides.

“The article was very well written and highly relevant," said the judges. “It will provoke plenty of thought among the many farmers who consider cultural control options, like rotational ploughing, delayed drilling and increased spring cropping, too expensive or impractical, and who until now have had little financial information on which to base their judgement.”

Farmers Weekly livestock editor Sarah Trickett gave farmers detailed guidance on how to assess when forage maize is at the perfect stage for harvesting.

“It was a truly excellent article,” said the judges. “Easily readable and containing a series of useful images and tables, as well as an online video, the advice will help farmers exploit this crop’s significant potential to the full.”

Choosing an overall winner was another challenge for the category judges; there was not a weak entry amongst them, with the range of subjects covered – from cow sheds to pig arcs, maize cobs to clover swards - adding to the difficulty.

To tease out the strongest candidate, the judges focused on four key criteria – readability, value to the target audience, evidence of in-depth research and overall impact on the sector.

The Guild's 2020 Harvest Service and Lunch has been cancelled and a new online event will take its place. Details will be released soon on this website and to our social media channels.