Winners unveiled for 2011 Perkins Power on the Farm Award

Perkins marketing personnel always make the presentation lunch for the Power on the Farm awards something special – and this year was no exception. 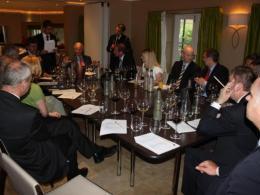 Before revealing the results, Perkins marketing director Nigel Baseley invited authors of the top scoring articles, together with other Perkins and Guild guests, aboard a Thames river cruiser for a run from Kingston past impressive properties to Richmond while enjoying champagne and canapes.

After disembarking at the Bingham Hotel, Richmond, the party was entertained to a tasting of fine Spanish wines by the hotel’s sommelier (left  above), with much talk of bouquets, noses, finishes and tannins enjoyed by guests including Guild members Andrew Faulkner, joint editor of Profi International (far left) and Classic Tractor editor Rory Day (left). 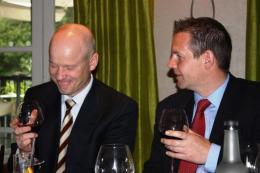 Then to lunch – crab risotto, Cotswold lamb and a delicious sweet – and the results announcement, when Nigel Baseley reiterated the company’s support for this Guild award as an opportunity to recognise and reward the best in agricultural journalism and a means of maintaining an important association with the agricultural industry.

“Our association with the Guild plays an important role in this and last year we committed to supporting the creation of the Guild's new website,” he said. “A year on, I’m pleased to see the new site is up and running and I understand it has been well received by Guild members. We look forward to helping develop and support it for the foreseeable future.”

As ever, the subjects covered by the entries were wide and varied, even though they did meet the general topic of Power on the Farm, and the articles were well researched and written.

Fourth placed was an article on the intracacies of combine grain loss monitors written by freelance Andrew Pearce for Profi International. Described by one judge as: “A worthwhile topic, not something often covered, but with significant impact on harvester performance,” the piece won its author a handsome bottle of champagne and £150 worth of John Lewis vouchers. 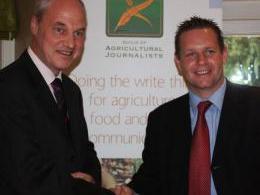 In third place, the judges placed an article on tractor theft, which earned Classic Tractor editor, Rory Day (left), a bottle of champagne and £200 in John Lewis vouchers. The article was described as an “enlightening and thought-provoking article that will have brought home the seriousness of tractor theft to many readers. It was filled with practical advice and honest case studies from unfortunate victims, well-structured, tightly written and a credit to its author.” 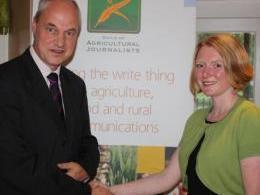 And then to the main awards: A feature article in Farmers Guardian on growing miscanthus as an energy crop won freelance Olivia Cooper the £1000 runner-up prize.

“This detailed, well-researched and, above all, well-written article would have provided its reader with all the basic information about this valuable new crop,” said the judges. “As an example of Guild members fulfilling their obligations to the agricultural industry – providing good solid information on which to base business-improving decisions – this one hits the spot.”

The Perkins Power on the Farm Award 2011 title – and a cheque for £2000 – went to freelance Andy Collings for the second time in his career.

His article covered the implications of ultra low sulphur diesel being introduced and provided “important information which is relevant to all tractor drivers, presented in a clear, easy to assimilate manner,” said the judges.

“It would have brought clarity to many farmers about the fuel composition change, for this was not well publicised in general,” they added. “It’s a very detailed explanation of a pretty complex subject that contains sufficient practical advice for farmers to take steps to avoid the problems highlighted.”

After the prize giving, Guild President Lord Cameron thanked Perkins for its support of the awards and the Guild’s new website, and emphasised the importance of agricultural journalism in keeping farmers in touch with the industry and the efforts being made to keep farming on the political agenda.

Nigel Baseley pointed out that 2012 marks the 40th year of the Power on the Farm awards: “We’d like to make next year’s competition really special and look forward to working with the Guild to achieve this,” he said.