Winners unveiled for 2016 Perkins Power on the Farm Award

The writing talents of four Members of the Guild were celebrated in the 2016 edition of the Perkins Power on the Farm Award after sponsor Perkins Engines Co introduced two additional prizes to recognise the contribution that journalists make to promoting agricultural innovation. 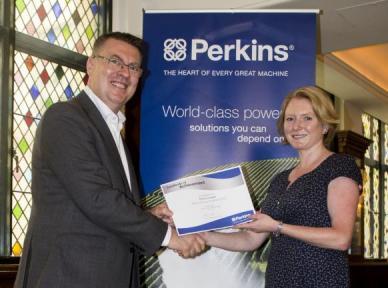 Olivia Cooper, winner of the Power on the Farm award in 2012, received the top prize of £2000 from Andrew Curtis for an article on dairy farm feeding automation, which had been published in Farmers Guardian. The judges considered it an informative and balanced article about the experience of the first farmer in the UK to use new automated feeding technology.

Second prize of £1000 was awarded to Andrew Blake, whose report on a farmer’s approach to optimum cultivations published in Tillage magazine, provided readers with a good insight into how a combination of cultivation techniques and other farming methods helped a Cotswold grower make the best of his ‘thin’ soils.

Due to the quality of the entries submitted, the judges selected two joint third prize winners who each received a £750 prize.

James Andrews won his for a Farmers Weekly article on the pros and cons of tractor engine tuning that enabled leading tuners, tractor manufacturers, dealers and an insurer to present their views on the topic.

Nick Fone’s “captivating walk through no-till crop establishment”, as the judges described it, was published in Crop Production Magazine.

True to form, the Perkins marketing team treated the winners to lunch at The Ivy restaurant in London after a cooking experience at the School of Wok with renowned chef Jeremy Pang.

"That my article was judged runner-up was a welcome surprise," says Andrew Blake. "I wish to thank Perkins for supporting the Guild and giving us all a great celebration day. Thankfully, I still have all my fingers after the fascinating Thai cookery course."

James Andrews commented: "Power on the Farm is a great award and I’m thrilled to have been shortlisted this year. Thanks to the Guild and Perkins for continuing to support the competition and for organising such a fantastic day out."

Oliver Cooper summed up everyone’s thoughts on the presentation: “It was an amazing day, as always!”

It's not just the cheques and the prestige of winning; the Perkins communications and marketing team always puts on a great presentation - this time, a Thai cookery experience followed by lunch at The Ivy! From left: Claire King and Annette Ward of Perkins with Guild chairman Ben Briggs; Andrew Blake and James Andrews; Adrian Bell representing IFAJ; chef Jeremy Pang; David Cousins, 2015 winner and one of the 2016 judges; Olivia Cooper, Andrew Curtis of Perkins and Nick Fone.