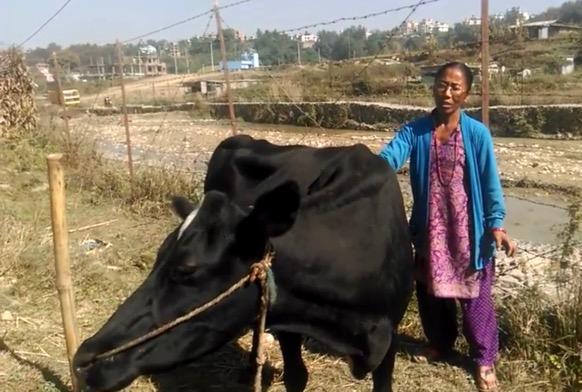 Nearly two years after the Nepal earthquake that cost the lives of 10,000 people, an appeal fund set up by the British Guild of Agricultural Journalists (BGAJ) has seen its first results, with the potential to create a long-term legacy in the form of a school agricultural training centre – a first for Nepal.

Nearly 80% of Nepal’s population depends upon subsistence farming for their livelihoods, but the country’s agricultural industry was devastated by the earthquake. Investment in agriculture, enabling people to farm successfully again, was one of the main objectives of the BGAJ’s fundraising.

“Two projects were identified to benefit from the funds by the British charity Global Action Nepal (GAN), whom we chose as our partner to ensure appropriate and targeted application of the funds,” says Adrian Bell, past BGAJ chairman, who administered the fundraising after meeting Nepalese agricultural journalist Pitambar Sigdel at the 2014 IFAJ Congress in Scotland.

“The first was an income generation and skills-learning programme for the Triratna community school in the Lalitpur region. They saw an opportunity to provide pupils with the basic agricultural skills and knowledge which would allow them to gain meaningful employment after completion of their schooling.”

Using empty land at the school premises, a kitchen garden was created and a range of vegetables grown. These were used in the school’s ‘home stay’, run by the cooperative to generate income for local social work, and were also sold to school staff and parents. The profits funded further school projects.

Students were involved directly and indirectly in the production of these vegetables, from clearing the weeds in the field, to sowing and irrigating the crops as they grew.

At the same time, they observed how the plants were grown, making clear links to the science and environment curriculum while gaining further agricultural knowledge. Students talk about their participation in the project in this video.

The success of the scheme, which was overseen by GAN for the first year but with ongoing responsibility now passing to the school, has led to plans to establish an agricultural training centre to teach vocational agricultural training – a completely new practice in the context of schools in Nepal.

“We do a lot of work with farmers on an individual and community basis, but there are very few farming NGOs active in Nepal,” says Chris Sowton, GAN’s founder. “Providing people with a long-term means of earning income is crucial for Nepal to move forward, and helping schools raise money by themselves is a good example.”

A second project focused on microcredit, also in the Lalitpur region. Laligurnas Mahila Samuha is a women’s group in Thulopukhari. They had just begun to invest in agriculture by saving a small amount of money within their group.

Each member had been saving 100 rupees (about £0.80) per person per month, the plan being to pool these amounts and distribute the sum as loans.

However, with a top-up loan from GAN of 300,000 rupees – about half the sum raised in the BGAJ appeal – 12 women in the group were each able to initiate their own farming project, ranging from raising goats, pigs, or poultry, to growing vegetables or tomatoes.

“Thus far, the group has not only been able to save money in buying less food from the market,” says Chris, “but they have also been able to sell their excess products.

“The money raised from these sales has also allowed their children to go to school – part of the deal we made with them, to ensure their children are supported to stay in education.”

One of the women involved, Maya Nepali, borrowed 30,000 rupees for a goat-farming enterprise. “Our women’s group has benefited a lot,” she says. “Before, we had very limited savings and we used to depend on each other for loans.

“The interest rates were 16% or even 36%. It was a huge burden to pay, making it very hard for us. But now we can mobilise money for supporting each other with very minimum interest. It costs just 10 rupees per 1,000 rupees of loan. The support we receive is really so good for us. We are grateful now.”

Another woman, Rabina Sunuwar, wanted to expand her dairy farming project. She had managed to secure funds previously to buy one cow, but she could not afford to purchase another. GAN agreed to buy a cow, and then contracted Rabina to look after it.

Rabina milks both cows – their yield is eight litres each day – and sells the milk at the market for 45 rupees per litre. Rabina takes 50% of the profits, while GAN uses the other 50% to support local education projects. A video of Rabina, with her cow, is here.

“As this project moves on, we hope to link up further schools, communities and students in other income-generating projects,” explains Chris, “and purchase further cows to maximise opportunities.

“We also hope to work with schools to advocate the value of vocational skills and their value in income-generating activities.”

Commenting on the appeal and its success, IFAJ President Owen Roberts said: “Through IFAJ, journalists throughout the world stay on top of developments both good and bad in each others' countries.

“IFAJ members have watched with keen interest as this superb philanthropic effort has evolved, and were solidly behind it. On behalf of IFAJ, I’d like to pass on our congratulations and admiration to those involved in the GAN initiative.”

Almost £5,000 was raised for the BGAJ Nepal Earthquake appeal, which was publicised in Britain’s Farmers Weekly. IFAJ members Australia and Ireland donated sums to the fund, while IFAJ also contributed.

Nepal became a member of IFAJ in 2015, following Pitambar Sigdel’s participation in the 2014 Master Class programme.