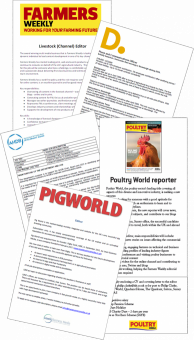 The Guild prides itself in providing an unrivalled recruitment service for publications, businesses and organisations looking to employ some of the UK's top agricultural communicators.

We do this by highlighting job vacancies direct to our 450+ members involved in journalism, photography, commercial PR and marketing communications.

Charged at just £175 each, this service comprises a dedicated Jobs eAlert email and a reference highlighting the vacancy in a monthly general eAlert – both with a link to a pdf document giving details of the organisation and the vacancy in question.

The advertisement is also displayed on the Guild website until the application closing date and the vacancy is announced via the Guild's Twitter and Facebook accounts.

This service provides Guild Members with all the latest information about current job vacancies – and how to apply – at their fingertips. To use the service, contact Peter Hill.

One past user of the service says: "Several of the better quality applicants responded to the Guild's e-Alert; we have successfully appointed someone and he is a Guild Member. We had small numbers in terms of responses to our recruitment ad from all sources, but it is quality that counts.

"We would certainly use the Guild again for future appointments advertising, as it is so well targeted for our needs."

Nine high quality tenders were submitted to the IAgrE for its house magazine contract, six of them as a result of circulating the tender document via the Guild's eAlert service. The contract was subsequently awarded to a Guild Member.

Chris Whetnall of IAgrE comments: "It was a very useful exercise that resulted in substantial transparency of process, added credibility to the tendering process and left me feeling that, having attracted a wide spread of submissions, I had done a good job."

The AgriScot event used the Guild eAlert service to help recruit a new PR and marketing agency. Bill Romanis, of the organising committee, said: "We didn't expect a big response, and didn't get one, but those we did hear from were of the highest calibre, so the exercise was most certainly worthwhile."

Mark Simpson of Young & Country wrote: "From reading comments on the Guild website from previous advertisers we were not expecting a large response but we expected those who did respond to be of a very high calibre. That is precisely what we got. We could not happier with the result and are very much looking forward to working with the journalists who contacted us.

"For the price of the advert, we feel it is tremendous value for money."

Looking for an opportunity to join a fast growing team working at the heart of World Agriculture?  TAP, based in Oxford and Madrid, is a leading content and communications agency specialising in agriculture and groundcare. We work with some of…

Do you love words? And agriculture? Then be part of our award-winning team… Agri-hub is looking for a motivated and experienced agricultural journalist / PR professional to join its small but growing team. Producing expert-written content,…

Hutchinsons is a progressive, family-owned national business founded over 80 years ago. Over 200 agronomists are dedicated to supporting farmer clients in producing high quality, profitable crops responsibly and sustainably. To support our…

Editorial and PR support from the Institute of Agricultural Management

Guild member Cedric Porter is providing editorial and PR support to the Institute of Agricultural Management and is the main point of contact for members if you need any copy or comment on farm management issues including training, skills…

Do you have a passion for arable farming? A head full of questions? Fancy the opportunity to talk to farmers, agronomists, scientists, farm business leaders in a search for the answers? Then we have the job for you as an Arable Reporter/Writer…

The search is on for a Marketing Coordinator and a Publications and Content Editor. Founded in 1960 after a small group of farmers joined together to form an agricultural buying group, Mole Valley Farmers has grown to become one of the country’s…

Are you an accomplished writer with experience of marketing and farming content creation? Would you welcome the challenge of providing PR services to sector-leading brands in agriculture? Can you demonstrate a track record of success in your…

Clients of this service: